The quilt retreat weekend is over (sniff, sniff) but we had such a blast. I can't wait until the next one! Everyone made such cute stuff (be prepared for lots of pictures).

My Aunt Katherine, Aunt Ellen, and Grandma were the teachers and spent all of their time helping everyone learn how to applique and then unpicking stuff that we (mostly me) messed up on. It is so much fun! I have always been scared to try it but I'm so glad that I learned how. We spent Friday - Sunday at my Aunt Katherine's house. She has a screened in back porch that we used. Tons of space, although we were thinking we might need more. We each brought our sewing machine and cutting mats and then just sat around and sewed out little hearts out. 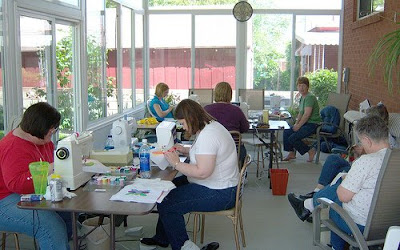 (There is grandma on the right unpicking some of my mistakes, Mom and Trish in the center working really hard, Carrie, Aunt Joan, and Aunt Ellen in the far back working hard too. Me, I was taking the picture!)

Here is what I made. This pattern originally called for two inch squares but I decided that was way to much work (too many seams and sewing) and so I switched it up and used nine patches and sashing instead. I like the way it turned out. I am going to add a small yellow border around it but I didn't get to that before the weekend was over. Isn't it cute!? 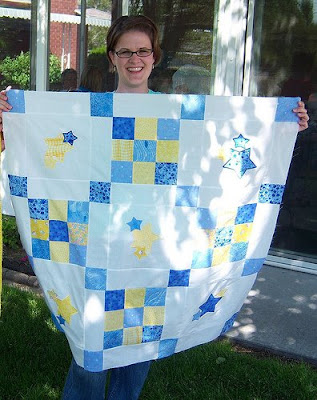 And that is my mom's quilt. She did six different applique bugs. They are adorable! She only has the embroidery left (another skill I am going to learn one day). The lady bug is my favorite! This is her Ta Da photo. She later put on a yellow border and then she will put on a smaller border around that. 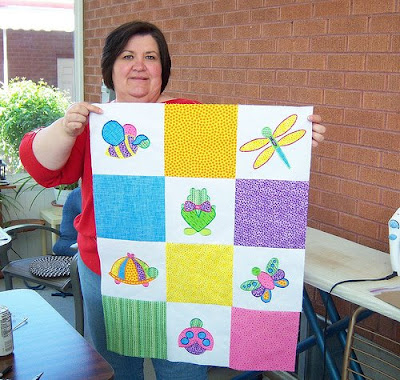 My sister is super talented and is doing a bedspread with all hand applique! HAND APPLIQUE! The whole thing by hand! Crazy, I know, but it is beautiful. And she isn't even going to keep it! I'd never attempt such a thing because I definitely would not get it finished. But look at how gorgeous it is. 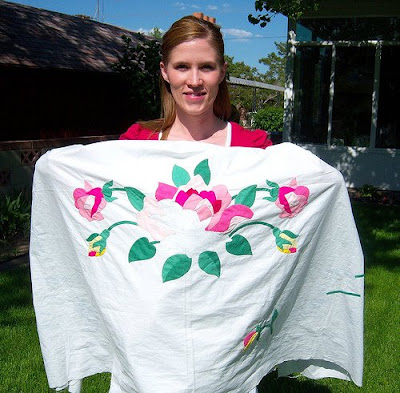 My Aunt Joan made this adorable duck! I love this one, and almost made it myself but decided against it because she had to make a million flying geese (they border around the duck.) It took her all day just to sew and square up the flying geese. I'm more of a fast and easy project type of gal. I love the pink cheek and the fishes in the blue of the puddle. When she is done, she embroiders rain drops above the umbrella. Okay, he is so cute I might end up making one of these two (since I know how). Doesn't he just look like a happy, friendly duck?! I almost want to go play in that puddle with him. 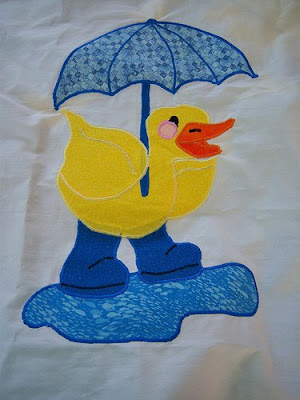 My cousin, Trish, made a bug quilt like moms, but different. I loved all the fabrics she used. She was really good at doing the super small circles on the bugs antennas. I stuck with the straight lines of the stars. She went home on Saturday and did the embroidery on hers and they are so dang cute when they are finished. (Hint Hint Mom) This is her TA DA! All she needs is the borders, and a few pinwheels in the corners. It will be adorable when she is done. Okay, I might attempt to make this one as well. They are all just so cute, I don't think I can stop with just one. 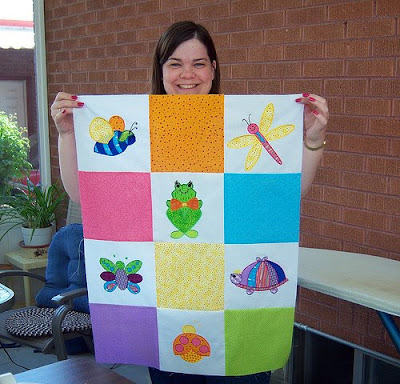 Carrie, (another cousin) who is going to have a baby girl in October, made this adorable lamb quilt for her baby. Isn't it cute? All the fabrics she chose worked so well with this pattern. They all had swirls and circles that looked like the fluff in the sheep's fur. I can't remember if this one gets a border or not, but I think it looks good just like it is. 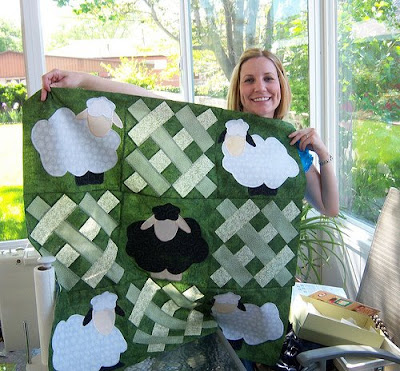 Aunt Ellen was working on one also, but she didn't get much done since every time she sat down someone would need help. Hers was even smaller than the two inch squares I was too lazy to make. I think she only got two strips sewn all weekend. Very busy gal. She did make this beautiful doll quilt (and a baby size one as well) for my Aunt Joan's granddaughter. Isn't it cute?! I love this moon. She has a really nice machine that does all this fancy embroidery on it. One day... one day.... that is what I keep telling myself. 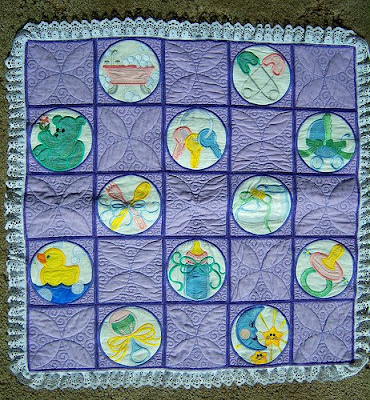 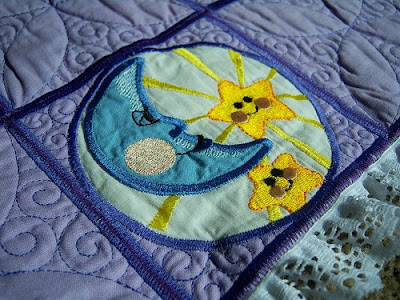 Well, that is it for the Ta Da's! What do you think? Everyone's quilt turned out so cute and I loved all the fabric and patterns. I definitely will be making more applique stuff in the future. It was a fun weekend filled with lots of chatter, food (lots of food), and sewing. I can't wait for the next one.

Wow wow wow! Your family is amazingly talented! Your quilt is fantastic. Your mom' quilt is amazing! I fell in love with it as soon as I saw it! Your sister is crazy for sure, but the bedspread looks amazing already. Seriously, a talented family! I want to come over for a beginner's quilter weekend! Bklyn isn't that far from Utah, is it?

wow! you have such a talented family! i need to get my family hooked on quilting so that we can have a girls weekend like this. It looks like you all had a great time together and the quilts you made are gorgeous!

That seriously looks like so much fun will all the family! I like the star quilt you make. I think blue and yellow for babies is so adorable.
All the quilts were so beautiful. I'm not really a very tallented sewer and I'm so impressed with all the nice quilting. Looks like you all made the most of your quilting bee!

Oh my the whole family in on the sewing that is so great. I totally wish I had some people in my family that likes sewing and crocheting as much as I do. Looks like you all had a great weekend. Totally keep it up have fun for me to lol. Makes me want to come and join in on the fun.

Wow what a neat thing to do as a family. I love all the quilts. Your family is very talented and creative. I am glad you had such a great time. Thanks for sharing.